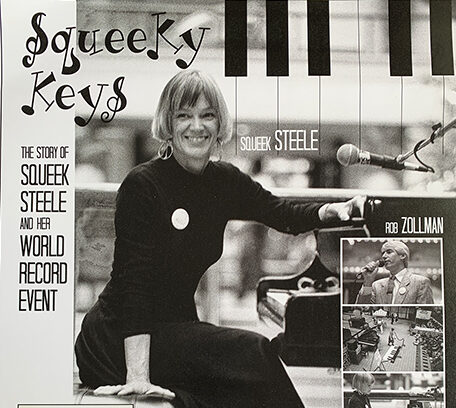 The first public screening of “SQUEEKY KEY’S”, the documentary of Squeek’s Guinness World Record in 1988 for most songs performed by memory, will be held Saturday, July 27, 11:00 am—3:00 pm in the Upper Gallery, Chandler Music Hall, Randolph, Vermont. “SQUEEKY KEYS” was directed and produced by Ginger Cook of BC Entertainment.

Following the showing of “SQUEEKY KEYS” there will be a Q&A with Rob Zollman, producer of the Guinness Event in 1988 and me. After a break and some light hors d’oeuvres, BC Entertainment will showcase their Feature Film “NEARLY DEPARTED” followed by another Q&A with Director Bob Cook and Ginger Cook.

After the two screenings, Ginger’s parents, Bill and Diane Brigham, will be hosting a pot luck reception for everyone at their home, 5 Prospect Ave., in Randolph, a short distance from Chandler Music Hall.

Tickets will be sold at the door to help with the cost of the event and will include both screenings, hors d’oeuvres, and an invite to the Brigham’s home after the screenings.
Seating is limited.

BY INVITATION ONLY EVENT.
Watch the Trailer:

Musicians lead complicated lives. Always confirm a date before arriving at the venue.

Squeek Steele is not only accomplished, she is versatile.